Data locality is a known problem and there are lots of information written on that topic. Most of modern CPUs have caches, so it’s best to keep the data that we access most frequently in one place (spatial locality). The other side of this problem is not to work on a huge chunk of memory in a given time interval, but work on a small pieces (temporal locality). The most known example of this kind is matrix traversal. And I hope that by now there are no developers who do matrix traversal by columns.

Similar rules apply to the machine code: if we will do frequent long jumps - it won’t be very I-cache efficient. Today I will show one typical example of when it can make a difference.

Without further ado let’s jump to the core of the article.

Keep the cold code as far as you can

Let’s suppose and error handling function is quite big (several I-cache lines) and it was inlined, which brought the code from it to the body of foo. As we know, the code is always layed out sequentially in memory. If we disassemble our foo function we might see something like this:

If we vizualize it we will see the picture how our hot code is layed out in memory: 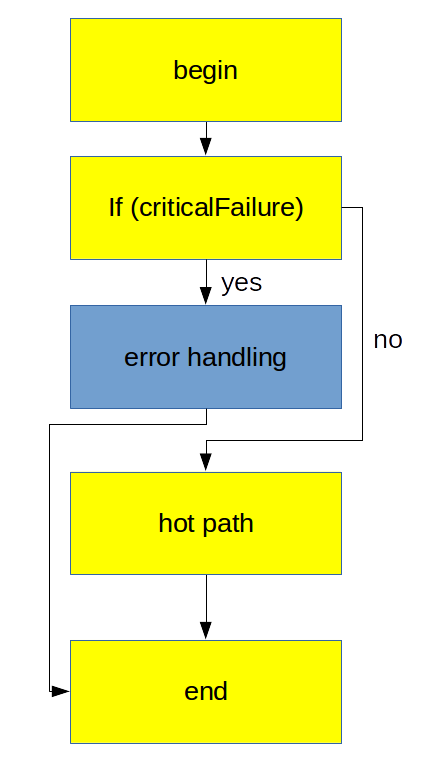 On the picture above I highlithed typical hot path over foo function with yellow and cold path with blue. You can clearly see, that we make one long jump from the block “if (criticalFailure)” to “hot path”. Without justification (for now) let’s take a look at another way of placing the blocks inside the function: 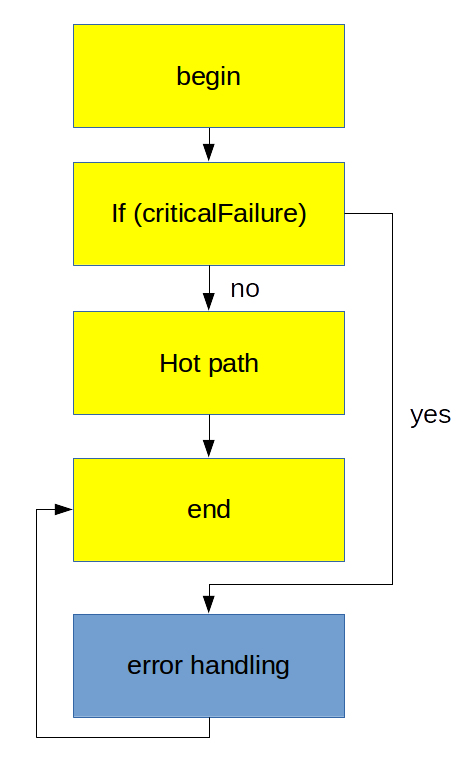 Why latter case is better?

(updated, thanks to comments by Travis)

There are a number of reasons for the second case to perform better:

So, how we can make the second case happen? Well, there are 2 issues to fix: error handling function was inlined into the body of foo, hot code was not placed in a fall through position.

Enough theory, show me the benchmark

I wrote a small benchmark to demonstrate the thing and show you the numbers. Below you can find two assembly functions that I benchmarked (written in pure assembly). My hot code only consists of NOPs (instead of real assembly instructoins), but it doesn’t affect the measurements. Benchmark is not doing any useful work, just simulates the real workload. But again, it’s enough to show what I wanted to show.

Complete code of the benchmark can be found on my github. Scripts for building and running the benchmark included. Note, that in order to build it you need to build nasm assembler.

And here is how I’m calling them:

Now let’s run them. My measurements are for Skylake, but I think it holds for most modern architectures. I measured hardware events in several separated runs. Here are the results:

Overall performance improved by ~15%, which is pretty attractive.

Additionally, we see that by reordering basic blocks we have 36% less I-cache misses (but it’s impact is miscroscopic), and DSB coverage is 6% better (calculated from IDQ.DSB_UOPS, but not precisly). Overall, “Front-end bound” metric decreased by 12% (calculated from IDQ_UOPS_NOT_DELIVERED.CORE).

Disclaimer: From my experience, this doesn’t usually give impressive boost in performance. I usually see around 1-2%%, so don’t expect miracles from this optimization. See more information in PGO section.

So, we can make two improtant points from this benchmark:

Compilers also try to make use of this and thus introduced heuristics for better block placement. I’m not sure they are documented anywhere, so the best way is to dig into the source code. Those heuristics try to calculate cost of inlining the function call and probabilities of branch being taken. For example, gcc treats function calls guarded under condition as an error handling code (cold). Both gcc and llvm when they see a check for a pointer against null pointer: if (ptr == nullptr), they decide that pointer unlikely to be null, and put “else” branch as a fall through.

It’s quite frequent that compilers do different inlining decisions for the same code because they have different heuristics and cost models. But in general, I think when compilers can’t decide which branch has bigger probability, they will leave the original order as they appear in the source code. I haven’t thoroughly tested that though. So, I think it’s a good idea to put your hot branch (most frequent) in a fall through position by default.

Built-in expect and attributes for inlining

You can influence compiler decisions by making hints to it. When using clang you can use this attributes:

Here is documentation for inline attributes and Built-in expect.

With those hints compiler will not make any guesses and will do what you asked for.

Another disclaimer I want to make is that I’m not advocating for inserting those hints for every branch in your source code. It reduces readability of the code. Only put them in the places where it’s proven to improve performance.

If it’s possible to use PGO in your case, it’s the best option you can choose. PGO will help compiler tune the generated code exactly for your workload. The problem here is that some applications do not have single workload or set of workloads, so it makes impossible to tune for the general case. But if you have such a single hot workload, you’ve better compile your code with PGO.

The guide for using PGO in clang is described here. In short, compiler will first instrument your application with the code for profiling. Then you need to run it, it will generate profile information that you will then feed back to the compiler. Compiler will use this profile information to make better code generation decisions, because now it knows which code is hot and which is cold.

I’ve seen real workloads that were improved up to 15%, which is quite attractive. PGO is not only improve code placement, but also improves register allocation, because with PGO compiler can put all the hot variables into registers, etc.