I want to do this warmup post, just to be sure that we are on the same page. It will also give you the taste of how the vector assembly looks like and how it works. I remember when I was learning vectorization stuff, I really missed the assembly that was generated by the compiler. I was like: “Show me assembly, I want to see how it’s done.” Even if there was assembly I didn’t understand how this hairy scary lines of code do the job.

I find the example in this post somewhat special. It might be not the most efficient assembly code, but in my opinion it nicely shows capabilities of the vectorization. So, in this post we will go through an assembly code line by line, visualizing the state of the registers after some portion of assembly code.

Here is the example: godbolt.

They load our input arrays into registers. By x86 calling conventions for 64 bit architecture our first three arguments are stored in rdi, rsi and rdx respectively.

Here is what values are in registers after this step (I removed registers ymm10-ymm15 because they are not used in this example): 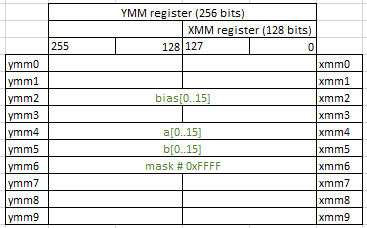 Because our computations can overflow the size of short, we need to use 32 bit integers for computation. That’s why we first “unpack” all the 16-bit values and make them 32-bit.

vpmovzxwd ymm1, xmm2 instruction zero extend 8 16-bit integers in xmm2 to 8 32-bit integers and puts them into ymm1. vextracti128 xmm8,ymm4,0x1 extract 128 most significant bits (3rd parameter 0x1 tells to do so) of integer data from ymm4 and store results in xmm8. 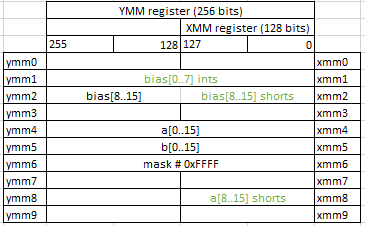 Next stage is mostly similar to the previous one, so I will just skip it and only show the result. You can trace it by your own. 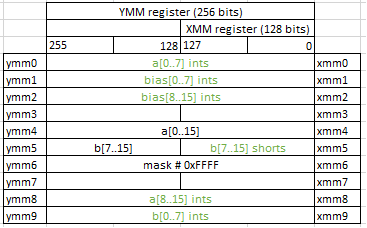 Up to this moment we prepared all data into separate parts. Next assembly blob is actually doing computation inside the loop. 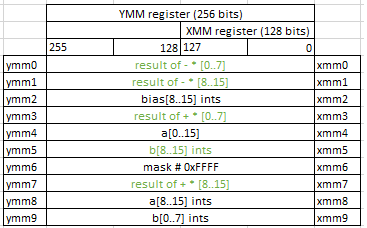 Finally, we do the right shifts.

By doing vpand ymm1,ymm6,ymm1 we just zeroing most significant half of the bits of each value in ymm1 (recall that ymm6 has values 0xFFFF in it). We need to do that because vpsrad is doing sign extension after shifting. 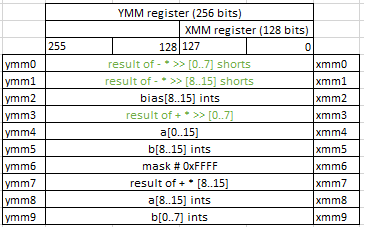 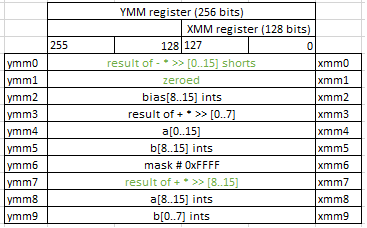 This is the most interesting part of this example. Instruction vpcmpgtw ymm4,ymm4,ymm1 compares 16-bit signed integers for greater than. Effectively this instruction does all 16 comparisons just in one instruction. Amazing! And for each pair of 16-bit ints it stores either 0xFFFF or 0 in the destination vector, depending on the result of the comparison. 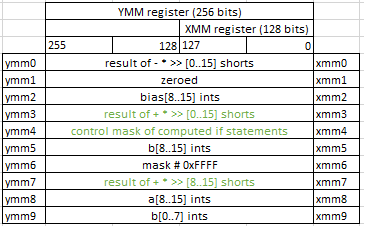 Note, that at this stage we have both branches of if statement computed (in ymm0 and ymm3) and we know all outcomes of the if conditions (in ymm4). So, we need to select proper values from correct branch results.

vperfmq ymm0,ymm3,0xd8 permute qwords in ymm3 using indexes in the third operand(0xd8) and store the result in ymm0. We need to permute values in ymm0 and ymm3 because of the nature of vpackusdw (see above). When vpackusdw combines two arrays together it does interleaving. When combining a[0..7] and a[8-15] this instruction makes the output of a[0..3] a[8-11] a[4-7] a[12-15]. So, to receive correct result we need to swap elements in the middle. And this is exactly what vpermq instruction with the mask 0xd8 is doing.

vpblendvb ymm0,ymm0,ymm3,ymm4 selects values from ymm0 and ymm3 according to the control in ymm4 and stores them into ymm0.

And finally, vmovdqu YMMWORD PTR [rdi],ymm0 stores values from ymm0 back to memory (in a[]). What is left is calculate the return value (agg), bit I will leave this exercise for the reader.

I want to point out a couple of things we learned from this example.

As a final note I want to put a links to the two great presentations from CppCon2017:

All posts from this series:

If you like this blog, support me on Patreon.